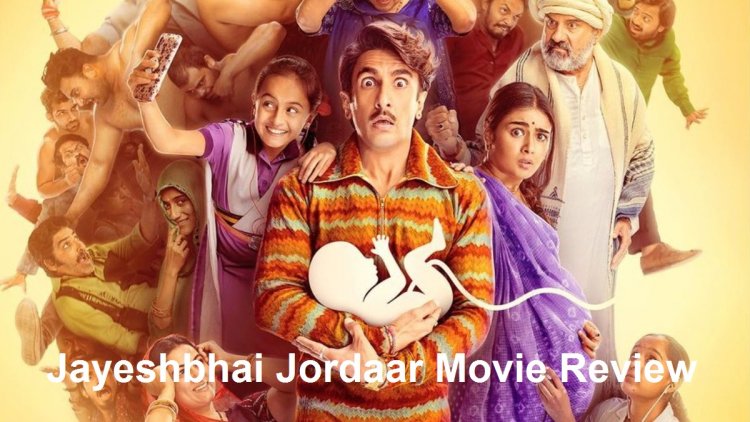 Taking you almost back to the world Priyadarshan and Neeraj Vora created with their 2004 film Hulchul, we are introduced to Pravingarh, a Gujarat village led by its patriarchal Sarpanch Ramlal (Boman Irani). He's like one of those politicians who believes that women wearing shorts invite rape and thus ban soap to 'protect the beauty' of the ladies in his village.

Sarpanch's son Jayeshbhai (Ranveer Singh) has managed to keep himself away from such conventional thinking, so he plans to flee from his wife Mruda (Shalini Pandey), and daughter Siddhi (Jia Vaidya) upon learning of the impending girlchild. What do you think is the issue with that? That is the issue that the makers have attempted to address with this whole cat and mouse chase involving a powerful Sarpanch killing lives so his 'vansh' could continue and his son who has had enough of this nonsense.

Note:- This Information is Taken From IMDB

After learning that his pregnant wife Mudra (Shalini Pandey) is expecting a second child, the feminist son (Ranveer Singh) of a patriarchal Gujarati couple (Boman Irani and Ratna Pathak Shah) embarks on a road trip with her.

How far will they get with the cops on their tail and everyone around them ready to snitch at any moment? Can Jayeshbhai usher in the next millennium for those around him?

Ranveer Singh made his debut as a ‘Dilli ka launda’ in Maneesh Sharma's Band Baaja Baaraat, but over a decade later, the actor's culture has changed, and the director's position has shifted. The only thing that hasn't changed is the nature of pure entertainment, with an added social message this time. For those who say it has an "outdated subject," how many "hero saves the day" movies have you seen and enjoyed? I'm not comparing the two, but if you're going to bash someone for using the same template, at least do so after seeing how it's used.

Divyang Thakkar’s story is a montage of a few extremely beautiful moments, some predictable monotonous sequences, and powerhouse performances by Ranveer and Jia, all of which address a social message that's been discussed before, but unfortunately/ironically there's always room for improvement when talking about Female foeticide in India due to the real-life cases we're still exposed to every now and then.

The script celebrates moments such as the 'bahu' of the house being forced to put her thumb impression on a piece of paper, *while* kneading flour for chapatis, leaving a bit of dough mixed with the ink, how, after being covered in a 'ghunghat' in all of her wedding photos, the 'bahu' attains freedom by letting the wind draw down her ghunghat while driving a car, and many more such small yet

Siddharth Diwan's love for the neo-noir style of capturing emotions comes in handy when depicting the film's 'raw' and 'natural' aspects. Namrata Rao, the film's editor, does everything right to keep the film tight! (I did this for a rhyme, but you get the idea.)

From Delhi's street-smart to Mumbai's cop, rapper, Turco-Afghan mad king, and now, Gujarati businessman – Ranveer Singh needs to be asked "How are they?" for the various characters he carries inside him (yes, I know I'm referring to the same story he recently revealed about Javed Akhtar-Gauri Khan-Shah Rukh Khan).

It's one thing for actors to get into the skin of a character; it's quite another to make you believe they're trying. From the dialect to the confidence in wearing any clothes (which comes naturally to Ranveer), Singh has been adding roles to his filmography that are not all easy to crack, but he manages to master them all.

The film also features two strong performers in Shalini Pandey (Jayeshbhai's wife) and Jia Vaidya (daughter). When it comes to contributing to the narrative, both of their characters play pass the pass. Jia is the queen of Ranveer's king, and she is proving to be a natural actor. Boman Irani annoys you with his absurd traditional mindset via his on-point act, and mission accomplished.

Ratna Pathak Shah always has higher expectations because she rarely fails, but here she is overshadowed by not getting enough meat when compared to other characters. She demonstrates her worth in a single emotional scene with Ranveer, but we needed more of them to properly establish the relationship between the son and his mother.

Divyang Thakkar brings a lot of experience from his previous roles in Gujarati films such as Kevi Rite Jaish and Bey Yaar. Thakkar manages the balance of humour and emotions well most of the time, nailing the regional flavor as smoothly as Maneesh did in Band Baaja Baaraat. The social message 'pop up in the second half may irritate some, but the wholesome climax will not let you leave the theatre empty-handed. (Also, drink a shot for every time the word "vansh" appears in the film.)

I can't remember the last time I labeled Vishal-music Shekhar's as the weakest link in a film, but this one does. There isn't a single song in the film that piqued my interest, let alone adding it to my playlist after listening to it while watching the sequences. The Balhara brothers (Sanchit and Ankit) keep jumping from films like Padmaavat, Bajirao Mastani, Gangubai Kathiawadi, War, Radhe, Panga, and now Jayeshbhai Jordaar, and it's difficult to guess what their signature style is because of all of these pan through an extremely varied range. This is also a good thing because it provides more variety, but I would like to see them develop their own style of composing.

After all, is said and done, Jayeshbai Jordaar does not handle an 'outdated subject'; rather, it picks up an issue that has already been addressed before adding its own charm, comedy, 'pappi-worthy' emotions, and 'oh so fantastic' performances by Ranveer and Jia.

Poco X4 GT Spotted on IMEI Database: and its nomenclature has been confirmed.