The first electric scooter with a removable battery allows for easy charging at your desk. 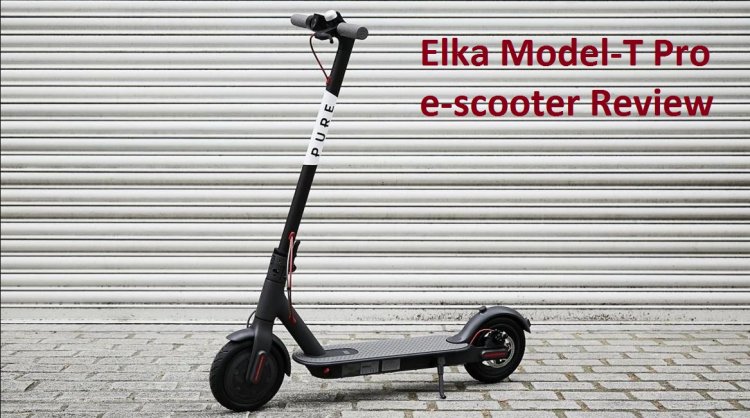 REASONS TO AVOID
-
Not the most robust

At the time of writing, it is illegal to ride an e-scooter on a public road, cycle lane, or pavement in the United Kingdom. A privately owned e-scooter can only be used on private land with the permission of the landowner. It's not the same for rented e-scooters.

Despite being illegal to use on public land, it is not illegal to buy or own an e-scooter, and you must wear a cycle helmet wherever you ride it (and a driving licence).

It's anyone's guess when government policy catches up with reality – it's all being debated right now – but regardless, the daily commute is on the verge of massive change around the world; it's disappearing for some and becoming a solo activity for others against the backdrop of deadly air pollution.

Cue a new version of Elka's Model-T Pro, a sleek, lightweight, and foldable e-scooter that's about to hit the market.

The Model-T Pro's matte black and aircraft-grade aluminum exterior is cleverly accented by a bright white logo on the steering column and model name on the footboard.

The red throttle on the right handlebar and a red braking cable protruding from the front and reappearing at the rear disc brake, however, really add some style.

It's IP54-rated, which means it's waterproof unless submerged, and can easily accommodate riders weighing up to 120kg.

Also Read: Under Rs 1 Lakh for an Electric Scooter. Honda U-Go Will...

The Model-T Pro requires little assembly out of the box; its simple fixing ring and folding lever make it a 10-second job to set-up and collapse for storage under a desk or on a train, though you will need a small hex key/Allen wrench to tighten the brake (there should probably be somewhere to store this on the structure itself).

It can almost be carried up the stairs/through a train station, though at 12kg, don't expect to do so easily – the Model-T Pro is heavy!

Given its weight, the folding feature is likely to be useful for storing it in the trunk of a car.

The Model-T Pro is extremely simple to operate. You simply turn it on by pressing the standby button on the red wraparound on the right-hand handlebar and nudge the accelerator, though you must manually kick-start it.

Meanwhile, an LED display between the handlebars tells you exactly what's going on: your speed in mph or kilometers per hour, your battery level in 20% increments (though an idea of the remaining maximum distance possible would be preferable), your gear, and whether there's a fault.

In theory, the Model-T Pro's 700W brushless front hub motor can reach 15mph/25kmh in eight seconds. The motor is actually limited to 350W. However, in our testing, we were able to reach 14mph/23kmh on a flat road, while bumpy or gravel roads reduced that top speed to around 12mph/19kmh.

Also Read: Mahindra XUV900 EV will be available on August 15th. The...

A short press on the function button – just above the throttle – switches between three gears, beginner, normal, and sports, which determine your top speed ('normal' is meaningless!). The indicator on the LED display that tells you what gear you're in, on the other hand, is very small and difficult to see in direct sunlight. It's also represented as a tiny 'D' in white or red, which is illogical. A large, simple B, N, or S – or 1, 2, and 3 – would be preferable.

Instead of having to keep your finger on the throttle the entire time, the Model-T Pro has a novel cruise control option. It activates automatically after a few seconds of top speed and is deactivated by any kind of throttle touch. You can also make it cruise at a slower rate. When gliding in a straight line, cruise control is useful in either case.

The Model-T Pro's brake is a disc brake rather than the more common rim brake found on street bikes, though the difference in appearance and feel is minimal. When squeezed on the left handlebar, it applies force to a rotor in the middle of the rear wheel. It works well, with enough braking power to bring the scooter to a stop in a short distance. It's actually a clever energy recycling system; when activated, it returns extra kinetic energy to the battery.

At high speeds, the Model-T Pro feels stable. Its 10-inch vacuum-sealed tires are strong enough to go over kerbs and other small obstacles without clunks, though bad or dirt roads reduce its top speed significantly. Only tight corners are difficult and slow; complete U-turns are best accomplished by stopping and turning the scooter manually. The overall weight of 12kg, which gives the Model-T Pro stability and rideability, also makes it a little hefty to push.

The Model-T Pro's standard battery, located in the column, is a Panasonic Li-ion rated at 6.4Ah and capable of powering trips of 9-12 miles/15-20 kilometers.

It takes about three hours to recharge the battery – either in-scooter or slid out of its hatch – using a bulky power supply box that connects to the mains with a kettle lead and powers up the battery with an old laptop-style attachment.

Also Read: Top 6 EV Innovations Underway in 2022 That Will Astound...

We had some issues removing and replacing the battery; it's a little difficult to line it up and click it into place.

A double-tap of the function button activates a six-metre ultra-bright LED headlight located just below the handlebars. It also has always-on taillights for visibility from behind. When the brake is applied, they flash.

The Model-T is the world's first electric scooter with a battery that can be removed. In theory, this means you'll never run out of charge again. Obviously, it's not quite that simple because you'll always need to ride the Model-T Pro with a spare battery in your backpack.

The battery is heavy at 1.5kg – roughly the weight of two laptops – and its 47x9x4.5cm dimensions make it difficult to fit into a standard backpack.

Is a removable battery really that useful in practice? It's definitely convenient to have a removable battery for easily charging it at, say, a workstation in an office – rather than having to physically bring the Model-T Pro into the office (ditto at home). It's also far more environmentally friendly to replace the battery when it's depleted – or, more likely, to replace it with a newer, larger-capacity model – rather than to discard the entire scooter.

Also Read: EV technology will bring in a new era for Rolls-Royce and...

However, don't plan on bringing an extra battery – they're heavy, and who's going to use the Model-T Pro for more than 9 miles/15km per day, let alone 27 miles/45km? We're not convinced that everything is necessary, but it's nice to have options.

The Model-T Pro is one of the most versatile and future-proof e-scooters available, with a removable battery and a plethora of battery options. If you're looking for a'my first electric scooter' and don't want to skimp, the Model-T Pro is an expensive, but practical option.

Ola S1 Pro will begin receiving MoveOS 2: And this Is what's New

The Kia EV6 Luxury Electric Car with a Range of Over 500km...

EV technology will bring in a new era for Rolls-Royce and...